The Cure for Grouchy Kids (and Me)


Go outside! Get some exercise! I used to hate it when my mom said this in response to my complaints of boredom, or anger, or tiredness, or any other ailment. Still, when I found myself with three grouchy kids yesterday morning, there were my mom's words, the only possible answer to a teething baby and pinching, whining big sisters. We went for a nature "scavenger hunt" first, walking down to the river and collecting acorns, bark, leaves, a rock. This helped some but as it lasted only 20 minutes we needed another adventure. Grace mentioned picking blueberries; Genevieve said that she didn't like blueberries ("They're disgusting"), and so we decided on raspberries at Mood's Farm in Mullica Hill. We hit unexpected traffic on the way, the baby cried, and the girls bickered to the point that I had to make the dreaded threat ("If I hear whining one more time, I am turning this car around"), but eventually we made it to our exit off Route 55. In the fields lining the road grew corn, lettuce, and blueberries, of course. As we got close to Mood's Farm and its trademark orange windmill, peach trees took over the fields. The baby was quiet--he had fallen asleep--and the girls excitedly commented on the landscape rather than poking and prodding one another. At Mood's, they weighed our containers, gave us a picking permit, and told us how to get to the raspberries. Though the market was crowded, we were the only ones in the  raspberry field, as most had opted for the easier to pick blueberries. The raspberries, we soon discovered, were difficult to find and needed to be just the right color and size so that they didn't fall apart at our touch. But there was something deeply satisfying about working to find just the right berry and hearing  the soft plunk it made when we dropped it in our container. 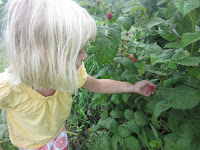 After about an hour, when Joseph seemed to tire of the Baby Bjorn and Genevieve certainly tired of the heat, we headed back to the market, where we bought nectarines, peaches, and freshly made apple cider donuts in addition to our raspberries. Everyone was feeling much better, myself included, showing me, once again, that my mom may not have been right about everything, but she was right about a whole lot of things. Go outside! Get some exercise! included.

Posted by RunningTeacherMama at 6:27 PM