RunningTeacherMama
Thanks for being here! I am a mom of three (two girls, 15 and 13, and one boy, 8) and a teacher of many (thousands during my more than 17 years teaching high school English and Spanish in Philadelphia). Forever a student, I love learning - whether through talking to others, reading, watching movies and documentaries, or traveling. I also love running (slowly), hiking, and practicing yoga! 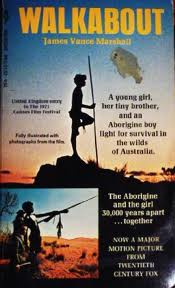 Coming in from the back porch after my run tonight, I picked up James Vance Marshall's 1959 novel Walkabout, which for some reason had fallen off the bookshelf into the stuffed animals. Just looking at the cover, the silhouette of an Aborigine boy standing on a rock at sunset, I was back in my classroom at Central High in Philadelphia, where I taught two sections of freshman English. Walkabout was a summer reading assignment. The theme of our year was "Search for Self." My classes were great at Central: inquisitive, creative, enthusiastic, and bright. When I left to come teach at Masterman (where my classes are also great), we all promised to keep in touch, but of course the rushing river that is life soon swept us along and far from each other (or at least me far from them). They graduated last year and are now off at colleges around the country. But I digress.

I opened to the first page of Walkabout out of curiosity, as I hadn't read it in five years. "It was silent and dark, and the children were afraid," the book begins, "...the little boy nestled more closely against his sister. He was trembling." The story, as many people know (the book was a bestseller, and there's a movie, too), is about a brother and sister whose parents die in a plane crash in the Australian Outback, hundreds of miles from civilization. They meet an Aborigine youth on his "walkabout," a test of manhood, and must undergo a walkabout of their own in order to survive. This is of course the 1950s and the brother and sister, from North Carolina, have all kind of ideas about the superiority of their own culture, ideas of superiority that begin to dissipate throughout the novel. What I had forgotten before I picked up the book again tonight was that the brother's and sister's names are Peter and Mary. Two more Christian names there could not be: Peter, of course, being the disciple who in his fear abandons Jesus (and then goes on to found the church), and Mary, Jesus' mother, who stays with him even at the foot of the cross.

As we enter this Advent season I have my own little Mary on the creche on my fireplace. She is surrounded by the sheep, the hay, the three wise men, and Joseph. They all, of course, are surrounding the baby, Jesus. The scene is quiet and humble. It is not self-aggrandizing or coercive or critical, as "Christianity" or "The Church" sometimes appears to be (and I say this as a  Christian and a member of the Catholic Church). It is not smug. Nor is it loud. No, it is humility and love that I see in my creche on the fireplace.  Humility and love, of course, being the path to God. A path we're trying to clear this Advent season (and again, and again, and again throughout life). I believe in this humility and love. I believe in Jesus. But I know that, like Mary and Peter in Walkabout, if I only wrap myself in comfortable ideas about  my culture and my religion, I am moving away from the place of beauty in my soul that the manger represents. I am moving away from God.

In Walkabout, Mary does this, and despite her good intentions, her ignorance brings about the death of the Aboriginal boy. His last action is to smile at her. For me, it is the most moving scene of the book: "It was the smile that broke Mary's heart: that last forgiving smile. Before, she had seen only as through a glass darkly, but now she saw face-to-face. And in that moment of truth all her fears and inhibitions were sponged away, and she saw that the world which she had thought was split in two was one." As Christmas approaches this year, may we all prepare to see God face-to-face.
Posted by RunningTeacherMama at 8:08 PM No comments:

So, I've gotten dangerously close over the last few weeks to just being "Teacher Mama" instead of "Running Teacher Mama." Work was busy, the kids were needy, the house was messy, the weather was bad, etc. etc. etc. etc. Ironically, last weekend I attended the Haddonfield Sports Banquet because a former tennis teammate, Kim Lamaina, was being inducted into the Hall of Fame. Kim was an amazing player in high school, one who was known for her aggressive strokes and net game (she was invited to train in Florida and try to go pro at one point), while I was a workhorse doubles player who was known not for her impressive ground strokes but for "always getting the ball back" (very boring), so it's not like I was reliving my glory days by being at the dinner. But still, being there was a poignant reminder that, at one point in my life, I had been an athlete.

Usually, running is enough to remind me, in a good way, of that past, and to bring enough of it into my present life to keep me happy and sane. After a few days without running, the happy me starts to sink bit by bit into the quicksand of modern, frenetic life. Before yesterday, I hadn't run for 3 weeks, at least. Finally, yesterday, Anthony was home for Thanksgiving so I was able to get out for a jog around the river in the morning while he stayed with the kids. My body creaked and protested, but the light was beautiful on the river, the warm sun felt good on my back, and the cool air felt delicious. It brought me back to solid ground again.

Tonight, I was determined to make it two days in a row, so after putting the girls to bed I came downstairs and headed out to the treadmill on the back porch. I allowed myself to go slow and ran three miles listening to Bruce Springsteen. I ran the last mile to "Something in the Night" and "Candy's Room," and then walked a bit to the sweet, sad "Promised Land." I felt good.

It's nearly 10:30 now and not much else will get done tonight, but that's ok. I'm running again, and that's enough for me right now.
Posted by RunningTeacherMama at 7:24 PM 1 comment:

I arrived in Philadelphia this morning from Charleston, South Carolina, where I had been for a writing workshop with Guideposts magazine (wonderful experience--always is). I thought I would just meet Anthony curbside, but he surprised me and came inside with the kids. Grace and Genevieve ran and gave me huge hugs, then the books they had made (Genevieve's, titled "The Adventures of Genevieve and Mommy," was short and simple: "Once upon a time, Mommy and Genevieve were walking a dog. Then, they heard a loud crash!" The End). Joseph kicked wildly and reached for me, smiling that huge baby grin. It was lovely! After our mini-reunion I did notice that Grace and Genevieve clearly had not bathed or brushed their hair all weekend, and that Joseph was not wearing socks on a chilly November day, but I chose not to say anything. The kids were safe and sound, they had had a great time with their dad, and, after all, who really cared what they looked like? That was all superficial stuff, I reminded myself (though I did find a pair of socks for Joseph in the car). And I am trying hard in my life to not let the things that I want (a clean house, well-dressed and freshly bathed children... ) interfere with what I really, really want (a happy marriage, joyful children). You'd think this would be easy, but it's not.

At the workshop this weekend, Guideposts editor Edward Grinnan signed his book The Promise of Hope for me, and I started reading it on the plane. It's a great story. He talks about workaholic overachievers at one point, saying, "There is no greater toxin to the soul than the self-expectation of perfection." The expectation of perfection is a toxin to others as well, of course. So as I settle back into my "real life" after this weekend of refreshment, I'm going to try very hard to remember that imperfections are a part of life to be overlooked, and at times embraced, but certainly not polished over.
Posted by RunningTeacherMama at 8:38 PM No comments: