I've started running in the morning. I wake when it's still dark, slip on the clothes I've laid out the night before, drink a glass of water, and head out the door. The crickets are chirping and the moon is out when I leave. The stars are shining, too. Then, it is down to the Cooper River, or "Cooper Wawa," as Grace used to call it when she was two (for Cooper Water, instead of Cooper River).
Only a handful of people are also out at this time, and I've come to recognize the regulars. The other day, when it was raining, there was only one other man, walking with his umbrella. "We got us a shower," he said, not unhappily, as I ran by. I run west first, towards the city, towards the Delaware River to which the Cooper flows. By the time I reach the foot bridge to cross the river, the sky to the East is a pale orange-pink. The sunrise. I cross the river and run East too. Last week, one morning was particularly beautiful. There were a few clouds in the sky, each a slightly different delicate shade of pink, and a lone boat, a foursome, out on the river. I thought of my mom, as I so often do on those morning runs. Sometimes, I miss her so much that it is all I can do just to say her name, Mom.

When I was little, my mom used to ride me around this river on the back of her bike. Once, there was a sudden thunderstorm, and we had to take shelter in a gazebo along the river. I remember feeling so safe. Mom, where are you? I asked that morning last week. My mom had made it clear to us before she died that she was not afraid of dying, if that was what was to be, though "Of course there is nothing I want more than to stay right here with all of you." I know that was true. Some people say, lightly, "Your mom is still with you," and of course though I know what they mean, she is not still with me. At least not in the same way that she used to be. How much I would love to be hugged by her one more time, or to hear her voice, or feel her hand warm in mine.

Last week, as I ran, I said goodbye to her again. I thought of her funeral, and how Ken Carter, the retired choir director of the Presbyterian Church in Haddonfield in which she, and I, had been raised, sang For the Beauty of the Earth. We hadn't seen Ken in years, but when the pastor called him up two days before the service to ask him if he would sing, he said yes without hesitation. Later, we found out that he had refused the honorarium. The song was his gift to us.

As I ran, the song's words came to me: For the beauty of the earth/for the glory of the skies/for the love which from our birth/over and around us lies ... This beauty, it is almost enough. Is it enough? Will it be enough for me? Can I believe, and remember, as a friend wrote to me after my mom's diagnosis, that "Our Creator is Good"?

As I crossed the bridge back home last week, the river beneath me, the sky above, I felt the answer, a gentle whisper in my heart: Yes. But ... Mom, Mom ... I still miss you so much. And just then, taking my breath away, a white egret glided in front of me, wings spread wide. For the joy of human love/brother, sister, parent, child/friends on earth and friends above/for all gentle thoughts and mild ... 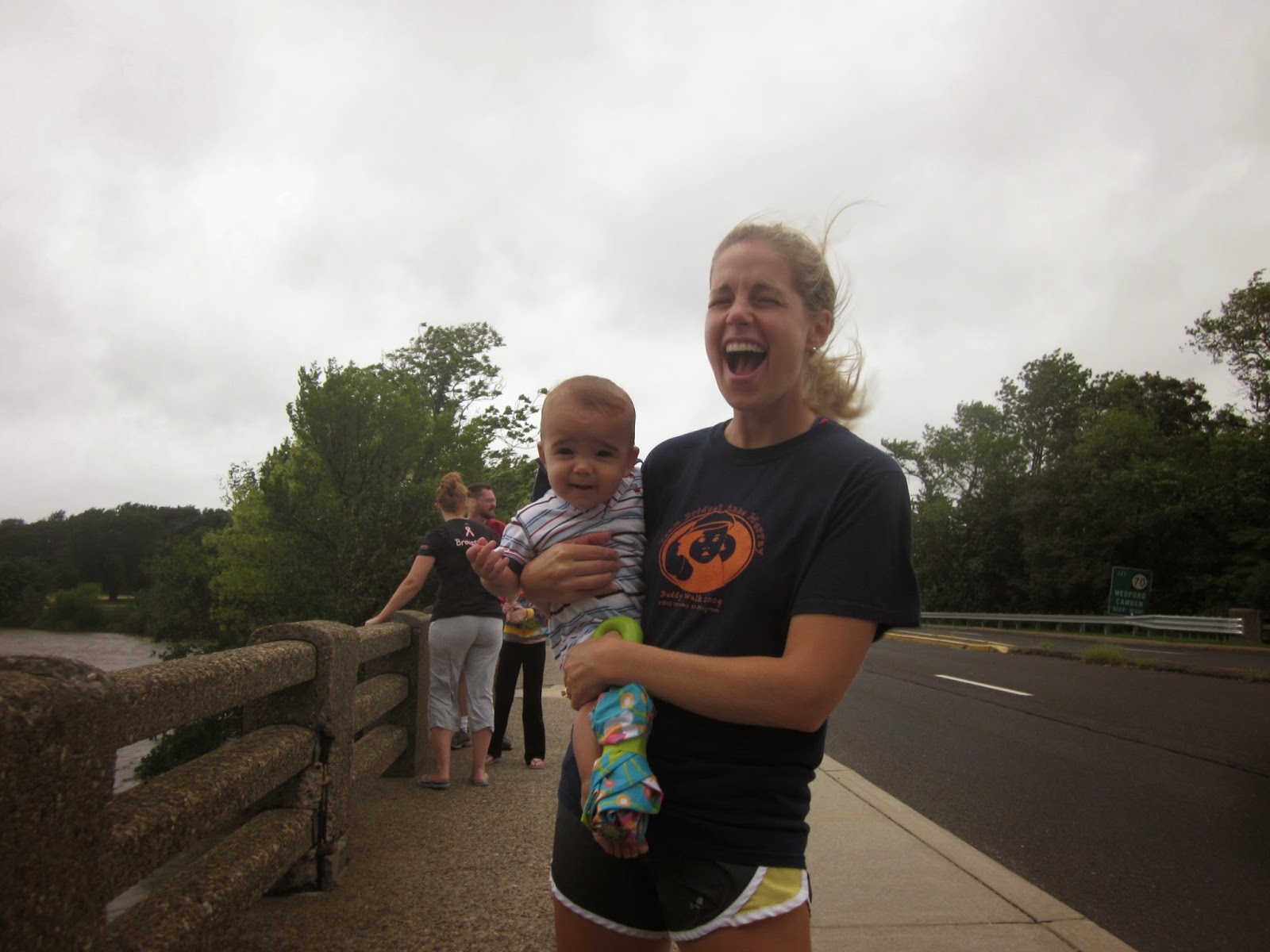 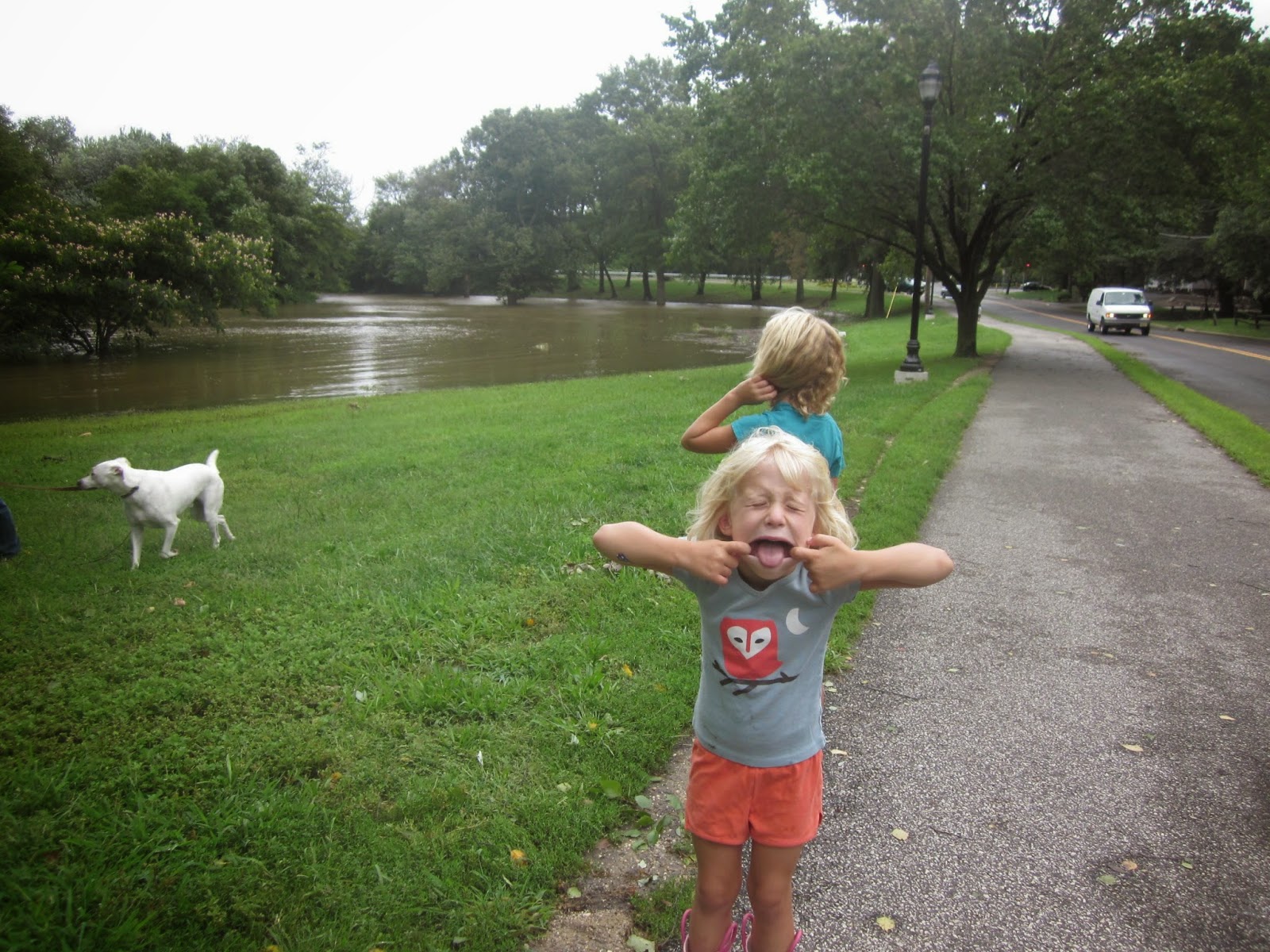 These pictures were taken along the Cooper River after Hurricane Irene in August of 2011. There was flooding, and the wind was strong, really strong (thus my face, to the right). Though I am wearing running clothes, I didn't actually do much running after Joseph was born, until now. In that picture, I am standing on the bridge where I saw the egret (and have since seen the egret several times).

Posted by RunningTeacherMama at 9:57 PM No comments:

Email ThisBlogThis!Share to TwitterShare to FacebookShare to Pinterest
Labels: Cooper River Runs, For the Beauty of the Earth, Ken Carter, Losing my Mom, Missing My Mom, Morning Runs, Presbyterian Church of Haddonfield

Poopin' Perry's on the Phone

I met my first best friend, Margo, on the first day of second grade. She made me laugh during lunch and played my favorite game ("pretend you're an animal") at a play-date at my house soon after. When I went to her house, her mom fed me snacks and invited me to stay for dinner. We walked to school together every day, spent nearly every afternoon together, and often had sleep-overs on the weekend. She held the umbrella for me as we walked to school the morning after my dog, Ranger, had died, and she, along with all my classmates, sent me a hand-made get-well card when I was out of school for two weeks with pneumonia.

To this day, I remember Margo's childhood phone number, as I called her house nearly every day from the rotary phone on my kitchen wall. We loved each other in that sweet childhood way that only first best friends can.

There was only one complication: Margo's big brother, Jonathan. I thought of him then as a a high-schooler but now I realize he was probably a sixth or seventh-grader at most. He was a bit Kevin Arnold's older brother from the t.v. series The Wonder Years and a bit Greg Heffley's older brother in the book series (and movie) Diary of a Wimpy Kid. And he did not take a liking to me. He may not have liked anyone else, either, but I specifically remember how little he cared for me. Margo and I would be sitting at the kitchen table doing a puzzle and in would walk Jonathan. I would attempt a smile and a "Hi," only to be met by scowling and a grunt of disgust.

Also, Jonathan claimed complete control over the family phone, so that every time I called (which was every day, possibly multiple times), he would answer. EVERY time. My name back then was Jenny Perry (I took the name Gentlesk when I got married), but when I called I didn't have to say my name because Jonathan knew my voice. Thus:

Silence. Deep sigh of irritation. Then ...

"Maaaaar-gooooooo! Poopin' Perry's on the phone!"

Then Margo would answer. We always just pretended that we hadn't heard the offensive name though, of course, we had. I would feel a bit embarrassed ( thinking "I'm NOT Poopin' Perry, I'll show him!") and then I would move on. Margo couldn't help her brother, and I couldn't worry about my last name beginning with a P. Right? This is what we do for love. This is just what we do.

Tune in next time for the story of how I hid in Jonathan's room during a game of hide-n-seek only to accidentally break his desk JUST as he came home ... You'll laugh, you'll cry ...
Posted by RunningTeacherMama at 8:13 PM No comments: